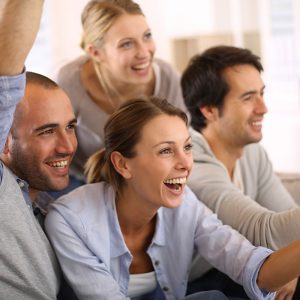 Ad Trends for the Big Game this Year

This Sunday marks a monumental football game 50 years in the making and is one advertisers are primed to spend big bucks on. Live from CBS, this year’s broadcast is expected to draw in over 110 million viewers across the world. It’s no secret that the annual event is, more often than not, about the advertisements during it and the cultural experience, so brands with extra spending money are using that to their advantage. Assessing metrics and public reaction from last year, agencies and companies are thinking smarter and playing to their strengths with these new tactics for this year.

From E-Poll Market Research’s findings, there are at least 33 celebrities involved with the commercials during the 2016 big game. Perhaps in an attempt to switch gears from the overall somber tone of last year’s ads, this year seems to be the year of funny and famous figures. With an assist from likeable stars, some ads have been released ahead of time and racked up views while a shorter cut will debut Sunday night on-air. This week, we’ve seen snippets of Steven Tyler with Skittles (the first celebrity spokesperson the brand has used), Helen Mirren with Budweiser, and Amy Schumer and Seth Rogen with Bud Light. Although, historically, spots with celebrities have performed lower than those without, this year might change the tide.


The Price is Right (for Some)

It’s a pretty penny to have a spot during the big game on Sunday. Up 11% from last year, an astounding $5 million is needed for a 30-second spot. While that is an incredible amount for media—for some as much as a third of their annual budget—for some brands, it’s a price worthwhile. Live sports are one of the last safe bets for high exposure on TV. With such a large audience paying close attention to ads, the high cost is guaranteed to draw eyeballs and make an impression, especially for game-watchers responding on social media.

Advertising Outside of the Big Game

In the past few years, there’s been more to simply airing a spot and waiting to gauge reactions. Squarespace, after a successful campaign with Jeff Bridges in 2015, has tapped Keegan Michael-Key and Jordan Peele of Key and Peele for a 3-hour feat for a second screen experience. As the characters Lee and Morris, they’ll comment on the game with only one caveat: they don’t have the rights to do so at all. Live-streaming from realtalk.squarespace.com, the event will tie in with the Squarespace’s ad during the game. This year, we’ll see more advertisers capitalizing on the huge audience directly before and after the game to save money as well as online to jump in on the big game action.

Will advertisers’ efforts and large sums pay off? The only way to find out is to tune in to the game on Sunday, join the conversation online and wait till the next day to see what’s the buzz at the water cooler.

Receive the latest industry insights from the evōk team in your inbox by signing up for the evōker, our monthly newsletter or contact us to explore ways we can partner.