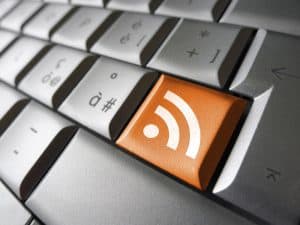 Is it Too Late to Start Using RSS Newsreaders?

Did you miss the boat on RSS newsreaders? Even though the technology isn’t the newest, you still may not have been an adopter of RSS newsreaders – here is why you should.

You’ve probably seen those little orange RSS buttons all over your email and the Internet but never really looked too far into them or how they can help you, but that button can actually serve as a way to help you gain access to the information that you’re most interested in.

RSS, an abbreviation for Really Simple Syndication, is a content delivery system customized just for you. By subscribing to various sources, RSS readers take all the information you want to see and put it in one place to, hopefully, help make your life a little easier. The goal of an RSS feed is to present you with news that is most pertinent to you and filter out any unwanted or unnecessary information. RSS newsreaders use software that aggregates content from various subscription-based sources and then presents you with a customized collection of headlines and article links in a feed. In simpler terms—RSS Readers are essentially just digital newspapers that are designed specifically for you.

Just like the name states, RSS readers aim to make things really simple. While email marketing is still considered to be one of the most effective forms of advertising, a lot of information gets lost in the clutter of junk mail and countless other promotional emails. Because of this, consumers tend to miss out on the emails from companies they actually want to hear from. Instead of getting 50 emails a day from different companies, you can just subscribe to them on your feed and have them all in one place. With RSS, you chose who you follow and if later on you don’t like what they are sharing with you, simply unsubscribe and with the click of a button they are automatically removed from your feed. On some news readers there are even options where you can save an article to read later if it catches your attention but you don’t have time to read it. As stated in BBC Magazine,

“The most compelling use of RSS is that it lets users read dozens of websites, all on the same page. The sites can be scanned in seconds rather than having to be laboriously loaded individually.” [Source]

There is so much information out there, and RSS feeds are a great way to make sure you have access to it.

While RSS readers do a great job of simplifying content, Google believes they have already become a thing of the past. They claim that the method of accessing information is outdated, but could that just be a way to protect their own interests? Google basically serves as an RSS reader on steroids, and if their consumers turn to newsreaders to access information, Google could take a hit—don’t they have an onus in wanting to share new webpages with you that could potentially house advertising?

In July of 2013, Google pulled the plug on their RSS software, Google Reader. When it was announced that the reader would be removed, Richard Gingras, the Senior Director of News & Social Products at Google said,

“Users with smartphones and tablets are consuming news in bits and bites throughout the course of the day — replacing the old standard behaviors of news consumption over breakfast along with a leisurely read at the end of the day.” [Source]

RSS readers require you to sit down and take in information, just like you would when reading a newspaper. While their decision to pull Google Reader may have an ulterior motive, Google has a point that RSS readers don’t seem to fit into the instantaneous mold that society is being driven towards. Everything is fast-paced now, and people want the information they are looking for to be fast paced as well. A lot of people would rather access quick information on Twitter in 140 characters or less as opposed to reading an entire news article or even just scanning through a collection of headlines. As this trend of immediacy continues to develop, it appears that Google, despite other possible motives, could’ve been onto something when they chose to get rid of Google Reader a little less than two years ago.

Even on an RSS reader you can still run into the problem of content overload. If you choose to subscribe to too many accounts, your feed can become completely overwhelming. This problem can be easily fixed by simply unfollowing accounts that you lose interest in. But, even after unfollowing accounts, there is sometimes still too much information in one place. RSS feeds do a great job of filtering out junk and things we don’t want to see, but there is no way to prioritize the importance of information in the feeds. The more companies you choose to follow, the harder it will become to keep up to date on everything in your feed.

If you do decide to use an RSS reader, it can be tricky to choose the one that is right for you. There are a countless number of readers out there and they all operate just a little differently. Some RSS readers are solely designed for your desktop, but most have adapted to the fast-paced nature of society and now also come equipped with a mobile app. Three of the most common RSS news readers are Feedly, FlipBoard and The Old Reader.

Out of the three top RSS readers, Feedly is one of the most commonly recognized and used software. It is a web-based application that comes with a mobile app and both have easy-to-use designs that make first time RSS use very simple. After registering on Feedly, you browse through topics you are interested in and then can select individual accounts to follow from there. So, if you are interested in technology but only want to hear about cell phones and not computers, you can select an account that only talks about the latest cell phone technology and your feed won’t be cluttered with information about other technologies. Feedly attempts to combat the problem of an over-cluttered feed as well. On your homepage, you can scroll through the different story headlines regularly and they are also all divided into categories, so if you only want to look at a specific topic you can. Overall, Feedly has one of the best user experiences and designs out of any other RSS reader and definitely helps take the clutter out of your RSS feed while still giving you access to all the information you want to see.

FlipBoard is another RSS reader that is both online and a mobile app, but it is not quite as user friendly as Feedly. Like a regular RSS reader, you can follow individual account to keep up-to-date on news about them, but FlipBoard also has you follow topics like technology, news or fashion, so there’s a potential to get information you may not be interested in. FlipBoard advertises itself as “Your Personal Magazine,” because it allows you to pull various articles and put them in your own digital magazines to refer back to later. The software has a great Chrome extension too, so you can add an article from just about anywhere to one of your magazines. Overall, Flipboard is unique and has some great features, but it is a little more complicated than some other RSS readers.

The Old Reader is the most simple of the three readers. You simply follow the accounts you are interested, and all of the information is presented in one feed that resembles a traditional email inbox. It marks an article as read after you click on them, so you can easily keep track of what you are reading. There are no topics or categories on The Old Reader, but you can bookmark articles to refer back to later. It has a mobile app called FeeddlerRSS so it can be used on the go. Overall, The Old Reader is the user-friendliest site, even though it’s not as advanced as Feedly or FlipBoard.

When it comes to RSS readers, people either love them or hate them. If you’re willing to sit down and take time to read the content, RSS feeds can be a great resource to you. RSS feeds may not be the solution for everyone though and as society continues to become more fast-paced RSS readers may soon become a way of the past. The software was made to put a wide variety of content right at your fingertips and if the style of accessing information fits into your lifestyle, then all that’s left to do is find the RSS reader that is right for you.