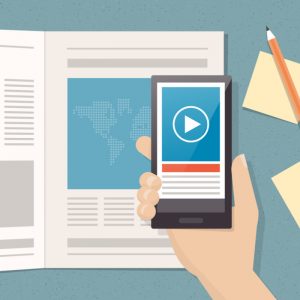 Hear from Advertising’s Next Generation

We’re always curious to learn what other ad professionals have to say about our industry. This month, we asked Kathryn Varan, a fourth-year public relations student and assistant connector manager at The Agency at the University of Florida, for her take on the present and future of print advertising. Now, we’re sharing her insights as one of our industry’s up-and-coming members.

As those of you in the media and communication industries are aware, there is more and more emphasis being placed on digital advertising and increasingly less on print. This isn’t a commentary on the industry as a whole, simply that many clients and audiences don’t see the value in print ads. As many of you also know, that is having a huge impact on advertising as a field.

According to an Enders Analysis on Business Insider UK, the amount spent on print advertising in the United Kingdom per year is expected to fall from $1.9 billion in 2011 to $663 million by 2019. Advertising as we know it could be changing drastically in the next few years. Now, as someone whose background is in social management, I love digital media as much as the next person, and I consume an embarrassing amount of content. But while clients and the average consumer may be fascinated with flashy mobile and digital advertisement, there is a lot of benefit to be gleaned from good, ole fashioned print.

Print advertisements are no longer the norm, so they are becoming even more effective when used correctly. On paper, everything matters from the color and texture, placement and size, and even interactivity. When these elements are carefully curated and work together, print advertising can strengthen a brand and generate tons of publicity.

The paper that an ad is printed on is sometimes even more important than the ad itself. Take this Glacial beer campaign designed by Ogilvy Brazil, for instance. The ad could be ripped out of the magazine, dipped in water, then wrapped around a bottle and stuck in the freezer to chill beer bottles in just a few minutes. Instead of being cliché and forgettable, this paper was embedded with salt to provide an actual benefit to the consumer. And I guarantee that this advertisement stuck in people’s heads a lot longer than just a banner ad for a generic brew.

But that isn’t to say that digital and print media can’t coexist and actually collaborate.

We are now moving into an era in advertising when digital and print media are actually working together to interact with the audience and enhance the ad experience as a whole. For example, take a look at this Volkswagen ad in a Norwegian magazine that allowed print media consumers to “test drive” a car by downloading an app. That’s the kind of innovation you should expect from such a technologically advanced industry.

So, no, print isn’t “dead.” We’ve been hearing that phrase since the Internet was invented, and it’s pretty clear that the decline of print, while still a reality, is happening a lot more slowly than we anticipated. To maintain its place in the world of advertising, print needs to go through a transformation or a resurrection so to speak. Gone are the days of boring, flat ads in magazines and newspapers. If paper ads are constructed so that every element works together to create a visually appealing and effective ad, then print has the potential to be just as compelling, if not more so, than digital.

Looking for more insights and updates? Subscribe to our evoker for monthly newsletters delivered straight to your inbox.